The founder of Bella Via, Sal Polito, was born, raised and schooled in fine Italian cooking from the moment he could hold a spoon. Sal's father, a butcher by trade, started on Vernon Boulevard in a butcher shop that became famous for its sliced steak sandwiches.

Eventually Sal senior went to open Casanova on McGuinness Boulevard in Greenpoint, just over the Pulaski bridge. This is where Sal began his schooling of fine Italian cooking, and started rolling pizza dough at the age of 4!

Later, his older brother Tommy opened Polito’s on Broadway in Astoria where Sal spent most of his youth making pizza for families of generations.

In 2002 Sal returned to the old neighborhood to open Bella Via, just as Long Island City was beginning to transform from an industrial space to a residential neighborhood. Sal choose the name “Bella Via” (pretty street) after the beautiful view down 48th Avenue the side of the restaurant afforded – to Gantry State Park and the East River. A highly favorable review by New York Times food critic William Grimes in 2003 cemented our reputation as offering some of the finest pizza and Italian fare in Queens, and beyond. The custom, authentic coal-fired oven Sal had installed allows Bella Via to craft the finest specialty pizzas, among other fare.

For over 17 years Sal has been happy to serve the Long Island City community. We hope to see you soon.

One of my staples in the area. The pizza is absolutely delicious but the calamari is a MUST. Excellent food and even better service. Love this place.
Austin
Queens
I loved my dinner at Bella Via. I recently ate here with a few friends from Italy visiting New York and we were all really happily impressed. We shared two pizzas, a plain margarita and one with prosciutto and arugula, and the two men on the table ate two different pastas, one with seafood and one with meatballs. All our dishes were perfectly cooked, and ingredient were fresh and delicious.
Martina
LONG ISLAND CITY 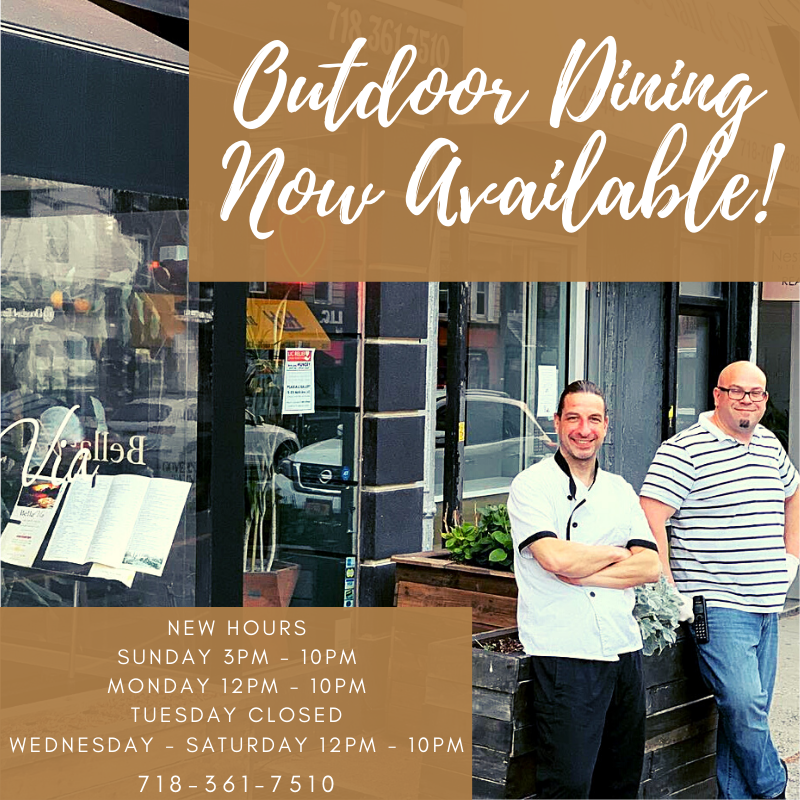